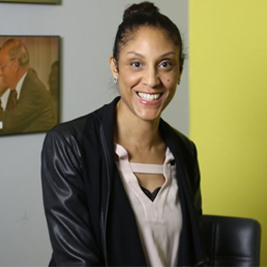 A resident of Somerville, Tina has been involved with print media since college where she interned at The Boston Globe, and was instantly drawn to the excitement of working in a newsroom. Serving as a voice for the multi-cultural community, she has published hundreds of articles featuring events such as the Democratic National Convention where President Barack Obama spoke. A people person, Tina enjoyed utilizing her communication skills during her one-to-one column interviews with celebrities like film maker Spike Lee, Cesaria Evora’s producer, and actors Cedric The Entertainer and Edward James Olmos. A graduate of Suffolk University Business School, Tina also managed the communications department for the Urban College of Boston where she launched print, radio and television media campaigns to promote affordable higher education for students of diverse communities. In this role, she was responsible for the department’s budget, fundraising, and creating content for the College’s newsletters, media packets and advisories, press releases, and annual reports. Most recently, she expanded her writing skills into comedy and has performed some of her own skits on stage in Somerville.  Tina is thrilled to join the SMC staff and hopes to use her passion for writing to promote Somerville’s thriving artist community! She can be reached at tcabral@somervillemedia.org